We are fortunate to have an extremely dedicated APU team on the GMNR led by Peter Wearne, who has been based at the GMPGR since October 2014.

K9 Conservation Anti-poaching Unit (APU) have provided logistical backup and support to the Greater Makalali Nature reserve (GMNR), through the deployment of elite, highly trained and specialized, working dog units. The K9 dog unit is based on the reserve permanently, patrolling both in vehicles and on foot. The field rangers and dogs are carefully selected and paired to maximize efficiency and effectiveness, including two extremely durable breeds: one being the Belgian Malinois, the other the Weimaraner’s.

Belgian Malinois: originally bred for herding purposes. The Malinois have the perfect temperament, intelligence, dedication, agility and high level of diligence to be the perfect anti-poaching K9 soldier on the frontline, protecting our precious wildlife. They also have a very strong bite strength, making them very effective in the field. They are trained to ignore all animal scents and track only human suspects.  Weimaraner’s are used mostly to track animals, detect animal remains and snares by scenting, to locate wounded animals and occasionally assist wildlife vets. Whilst both breeds are classed as ‘patrol dogs’, their functions differ somewhat and often their individual skills and abilities compliment and assist each other in the field. 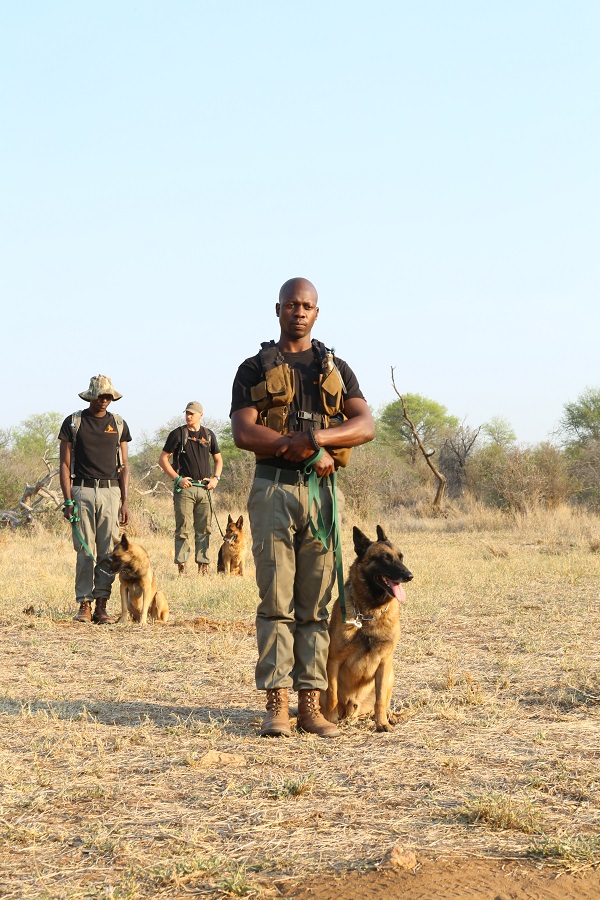 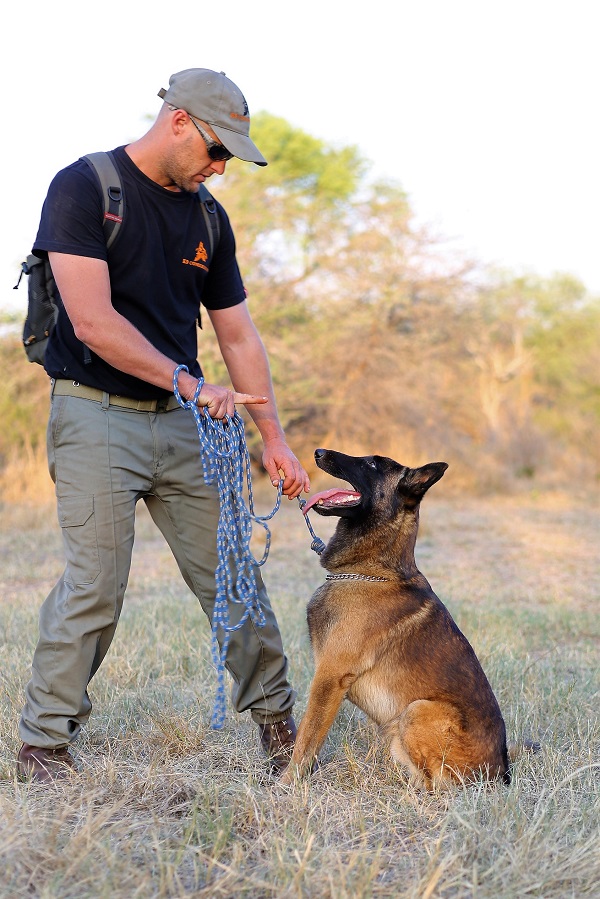 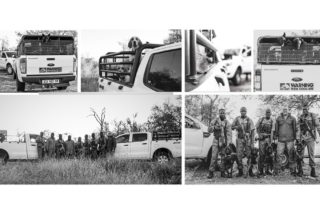 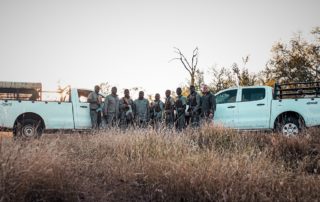 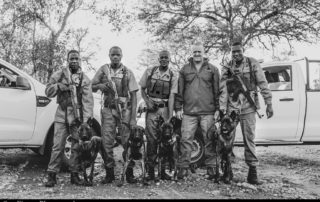 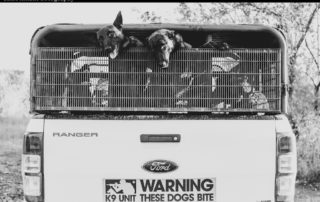 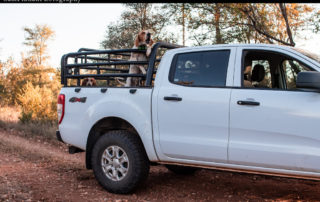 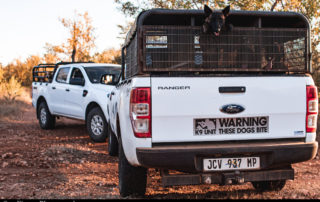 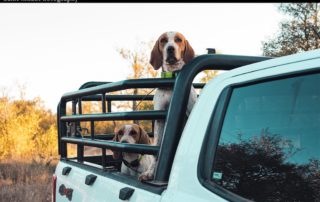 Reintroduction of Wildlife: “Back to the Wild” (B2W) Programme 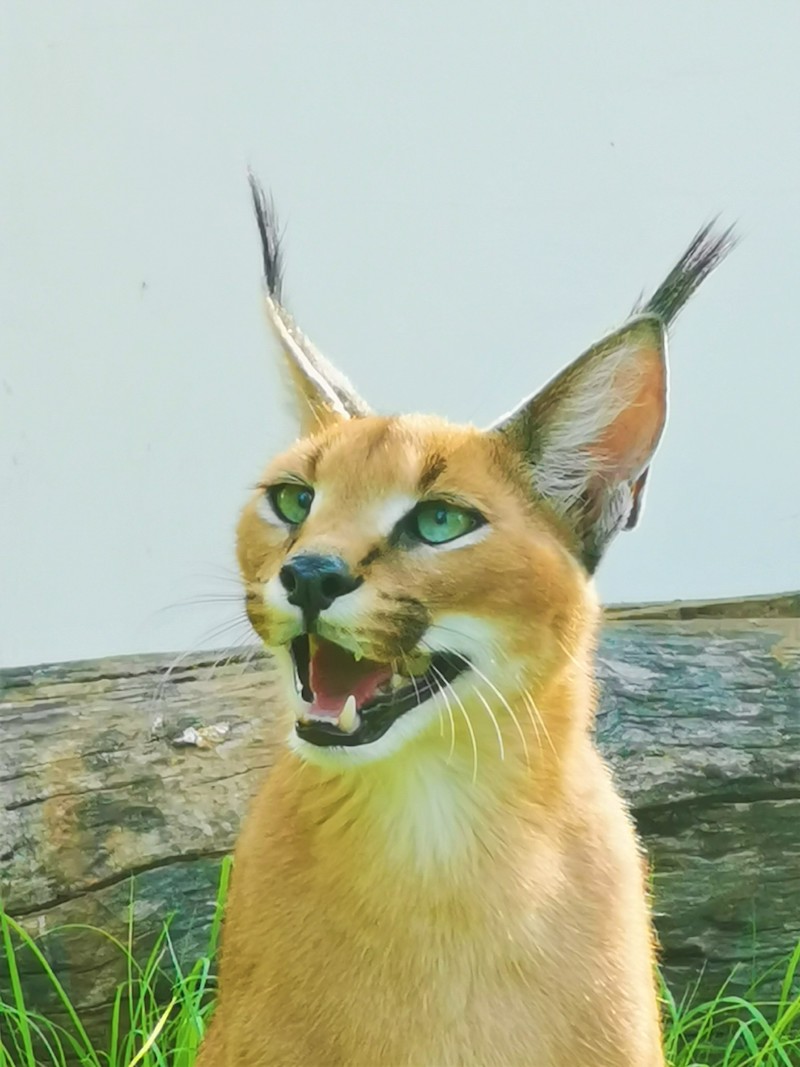 Returning to their Natural Environment

The B2W objectives being the promotion and conservation of wildlife, fauna and flora and the natural environment, including the ecosystem, in and on the reserve land; establishing a formal release facility for compromised and rehabilitated indigenous wildlife on the reserve land.

Over the years, the GMPGR have facilitated the release of several species from various centres on a small scale. The capacity for release within GMNR has been greatly increased through the construction of 4 suitable rewilding enclosures within a release facility, with the funding assistance of the Humane Society International (HSI). A slow-release process is carefully managed whereby the previously compromised and rehabilitated animals are successfully released back to the wild.

The Back to the Wild Programme was implemented by their Reserve ecologist, Audrey Delsink Kettles. It is currently managed by the Reserve management, who works hand in hand with Audrey Delsink Kettles (Executive Director of Humane Society International/Africa) and Nicci Wright (Executive Director of African Pangolin Working Group and an internationally qualified wildlife rehabilitation specialist.)

There are two Environmental Monitors who are stationed at the Back to Wild facility, who play a major role in the success of this programme. This would not be possible without their dedication and care for the wildlife.

Reintroduction of African Buffalo into the Greater Makalali Nature Reserve 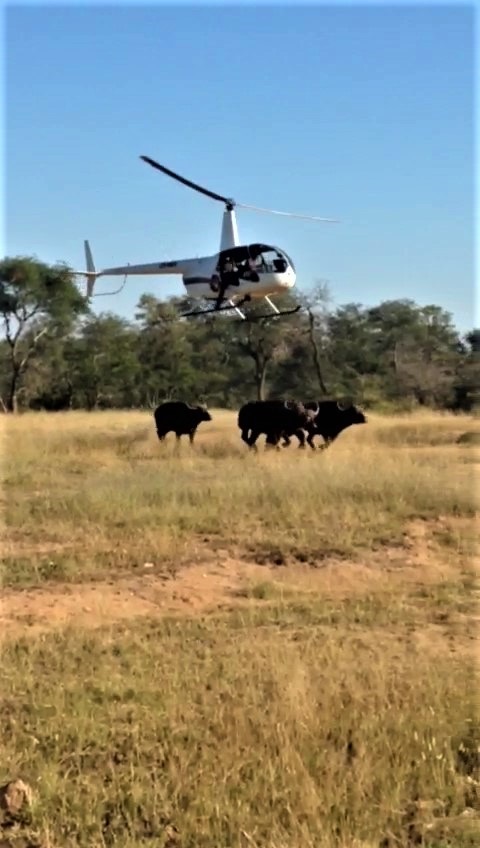 African buffalo, Syncerus caffer, members of the bovine family, were once widely distributed through Sub-Saharan Africa, but the advent of a Rinderpest epidemic between 1896 and 1899 resulted in their virtual extinction in most parts of Africa south of the equator. Due to their natural resilience and concentrated conservation efforts, buffalo are once again reasonably well distributed in areas under conservation in South Africa, Zimbabwe and Botswana.

Although African Buffalo are known carriers of amongst other diseases, Foot-and-mouth disease (FM) as well as Corridor disease, a new threat of potential massive implications has surfaced in recent years, namely Bovine Tuberculosis (BTB). A large percentage of Buffalo in the Greater Kruger system have been affected by BTB.

The breeding of disease-free buffalo has resulted in the establishment of pockets of these animals outside the Kruger Park system and associated areas. These areas are outside of the Red line. To ensure FM and other diseases don’t get transmitted to animals outside the Red Area strict control measures are applied.

The Greater Makalali Nature Reserve (GMNR) is an area of 25 000 hectares. In 1994 a game reintroduction program of endangered species and species previously extinct to the area commenced. This was part of the first ever relocation of intact family groups of adult elephants from the Kruger National Park. In 1995, spotted hyenas, hippos, and white rhinos were also relocated onto the property and the following year cheetahs came back to the area. In 1995 five lion were reintroduced. The area currently hosts all the game species previously indigenous to the area, apart from roan and sable antelope.

A disease- free buffalo breeding project commenced over ten years ago in a 400-hectare buffalo camp bordering the GMNR. The vision was to eventually release a substantial herd of buffalo into the open system after an absence of more than 50 years.

On Saturday 22nd of June 2019 the fences of the buffalo camp were dropped, and the buffalo were driven into the open system by helicopter. The occasion was witnessed by Members of the GMNR, their families including Gary Elmes the Chairman of the Greater Makalali Private Game Reserve (GMPGR) and the Reserve Warden Rob Panos.

The buffalo release has brought much excitement into the Safari Industry as it’s been more than half a century since all the big five have roamed freely within the diverse wilderness area of the GMNR. 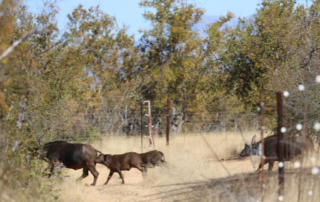 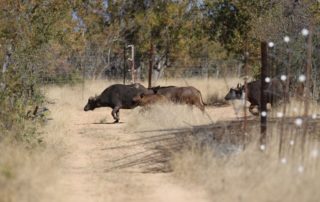 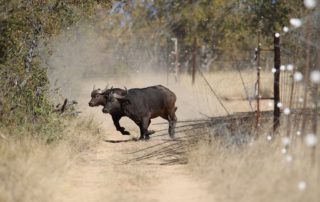 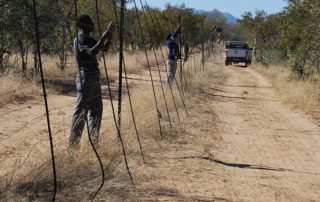 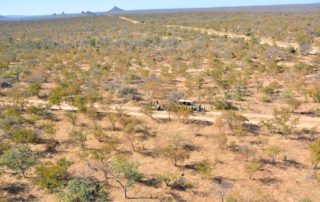 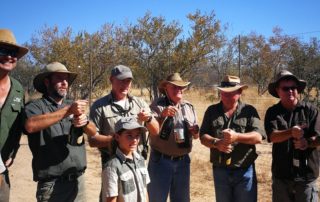 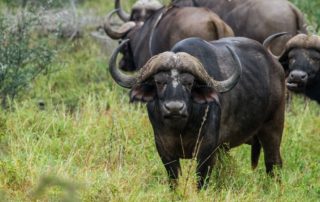 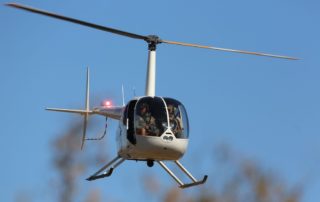 The Greater Makalali Game Reserve (GMPGR) has become the newest addition to the Wild Dog Range Expansion Project, coordinated by the Endangered Wildlife Trust (EWT) and the Wild Dog Advisory Group of South Africa (WAG SA) as part of on-going efforts to save the species from extinction.

The goal is to reverse the decline of wild dogs globally, by actively increasing their populations and range throughout southern Africa. This is achieved this by establishing, maintaining and expanding safe space for wild dogs; reducing threats to their survival; ensuring positive changes in human-based values to wild dogs; and supporting laws to better protect them. Despite this, wild dogs are still among the most threatened animals in Africa, under severe threat from snaring, poaching, disease, roadkill, and habitat loss.

In southern Africa, the Endangered Wildlife Trust (EWT) is helping reverse this continent-wide trend, and the population has stabilised at around 500 individuals.

The reserve is currently 25, 000 ha and has recently obtained national private nature reserve status. Due to its size, ecology and management efforts made to keep the area protected, the Greater Makalali Nature Reserve has been identified as an ideal site to introduce a pack of wild dogs.

Wild dogs have previously passed through the area, but the aim of this introduction will be to promote a stable pack that resides on the Reserve.

The most recent translocation to the GMPGR was made possible thanks to a group effort by aha Hotels & Lodges, the EWT, WAG SA, the Scott family, owners of the GMPGR and Rob Panos, the Reserve Warden. 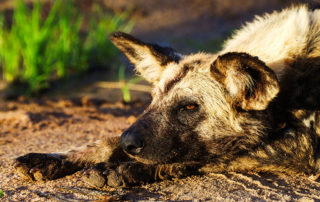 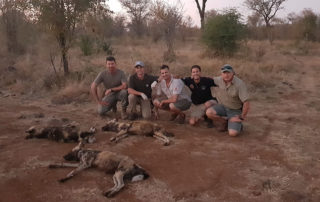 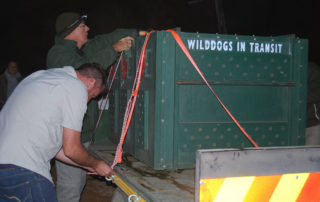 The Greater Makalali Private Game Reserve (GMPGR) is part of the Cheetah Metapopulation Project, coordinated by the Endangered Wildlife Trust (EWT) which contributes towards the management of approximately 335 Cheetahs on 53 reserves in southern Africa.

The principal goals of the project are to maintain the genetic and demographic integrity of the metapopulation and to increase the resident range of cheetah in southern Africa.

The latest addition to our cheetah population was a subadult female that was purchased from Shamwari Private Game Reserve in 2018, thanks to Bernie Smith, owner of Garonga Safari Camps. 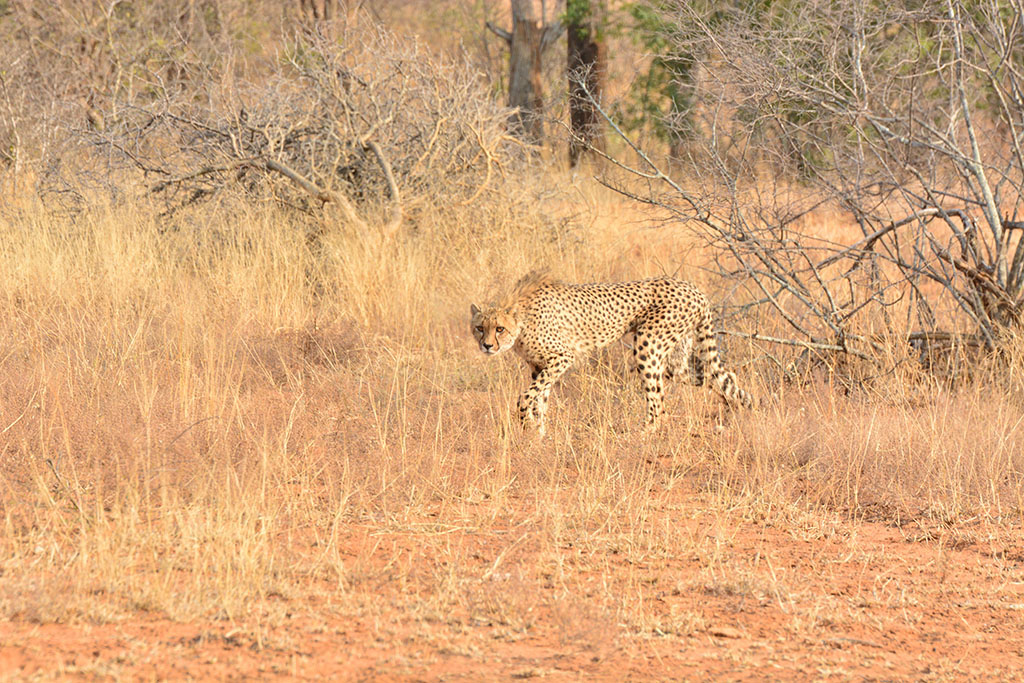 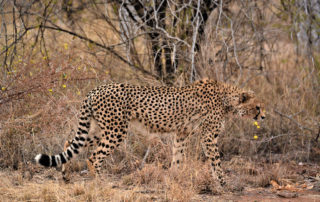 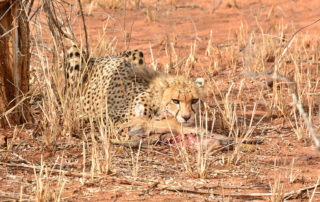 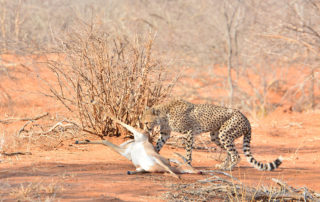 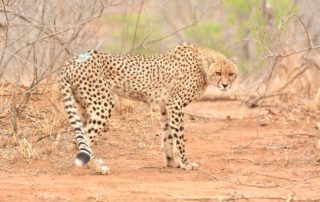